Schumann & Schubert – Anneleen Lenaerts and Dionysis Grammenos have released a harp/clarinet disc of Schubert and Schumann on Warner Classics. All the tracks are masterpieces from the heyday of the German Romantic period: Schubert’s Arpeggione Sonata D821 and ‘Ständchen’ from Schwanengesang, Schumann’s Drei Romanzen Op.92 and Fantasiestücke Op.12, and songs by Clara Schumann from the Rückert Lieder. 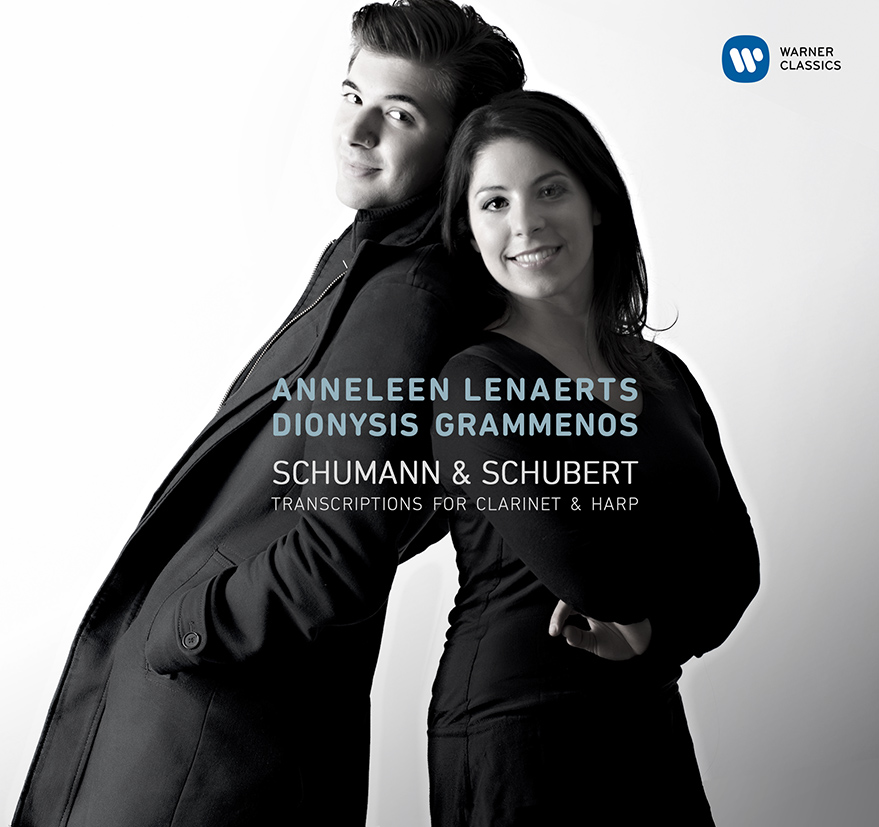 The Harpissimo-Québec Association, member of the ISFHC (International Society of Folk Harpers and Craftsmen) is celebrating its 20th Season (2016/2017). On this occasion, they have made a video entitled “Harpissimo-Québec: 20 and déjà” which can be seen on YouTube. They also produced a third CD called “Le chant des cordes”.

They are giving many concerts in the Québec province this year, including a concert in Verdun (Montreal) celebrating the 150th anniversary of the Canadian Confederation (1867-2017). On this occasion, the group will play an entire program of works by Canadian composers.

Their co-directors and founders, Gisèle Guibord and Robin Grenon, are very proud of the path undertook by Harpissimo-Québec 20 years ago. The association has now 42 members, and The Harpissimo-Québec Ensemble, near 20 active members, mostly from the Montreal area, but also from the region of Eastern Townships, Lanaudière and even Vermont State (U.S.A.), getting together once a month to rehearse and socialize.

For more information, visit our web site: www.harpissimo-quebec.org or www.robingrenon.com 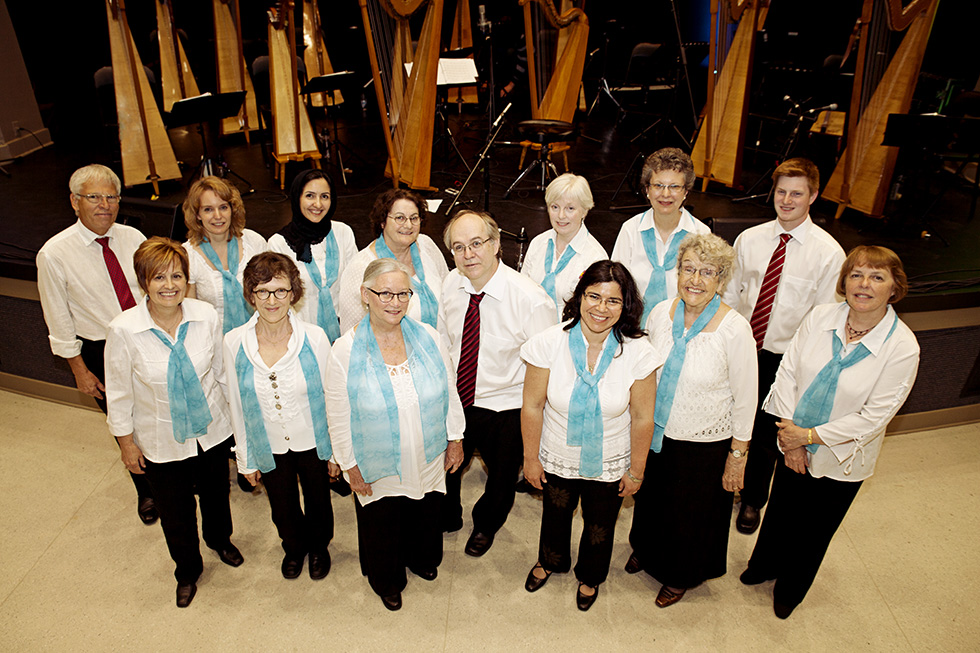 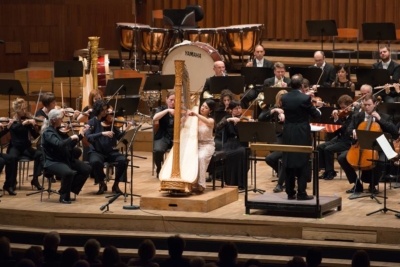 The Festival d’été de Gargilesse celebrates its 50th anniversary this summer (5-20 August 2017) with 60 harpists performing in 25 events.  The festival was created by Pierre Jamet, whose daughter Marie-Claire will be the guest of honour. 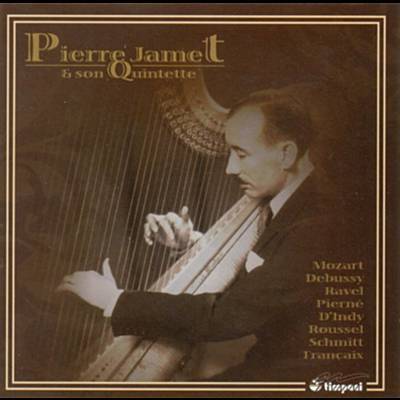 Anne Ricquebourg, who is the artistic director of the festival, writes on the city of artists:
“George Sand, writer, came to Gargilesse since 1857. The last lover of George Sand offered her a little house. It was her refuge. She wrote some of her latest novels at Gargilesse. We can visit her home: it’s like a doll house with many of her  collections: butterflies, insects, pebbles, puppets of his son and her clothes, little shoes…
A lot of painters came also during the impressionistic period. Claude Monet has painted the famous series “boucle de la Creuse” , and Léon Detroy, not well known, but a very good painter, and many others lived here. They have founded “l’école de Crozant “, group of impressionists in the Berry (region of south of Paris). The parents  of Pierre Jamet (Henri Jamet and Marie Mahout) and Pierre Jamet himself  were painters. It’s the reason why Pierre Jamet lived at Gargilesse. Henri Jamet bought his house in 1892. Pierre Jamet was one year old. There are pictures at Gargilesse of Pierre Jamet as a baby, in the arms of his mother, by Henri Jamet . Pictures also of Pierre Jamet and Marie Mahout.
Now, it’s always the city of artists, with painters, sculptors, book illustrators, puppet maker, ironworker of art, picture framer … there are many exhibitions, in the farm, space of the dovecote, the castle, house of Léon Detroy,  museum (which was the school of the village before )…
There are many things to do in the country also: hiking in the countryside, kayak trips on the Creuse. There are very good cheeses (of goat) and culinary specialties.”

The annual meeting of the VDH (Verband der Harfenisten in Deutschland) took place in Ingolstadt 29 April to 1 May. Paul Patterson gave a masterclass on his works and was appointed honorary member. Also severals lectures, concerts and discussions took place.

The 8th National Harp Competition of the VDH will take place in Sondershausen end of April 2018.  New to the competition, which includes orchestral excepts as part of the repertoire in the advanced level, will be an “Open Stage”.  For repertoire and more information please visit: harfe-vdh.de

Between 2 and 18 February the third Bologna Harp Festival, organized by the Associazione Culturale Arpeggi, took place.  The focus of this festival lay on music therapy. American and pioneer harpist Christina Tourin, Director of the International Harp Therapy Program in San Diego, gave a two days masterclass for harp students and a concert.

A concert with Davide Burani (harp), Cristina Zavalloni (voice) and orchestra at the Duse Theatre enchanted the audience with popular music by De Falla, Berio and Ravel, while contemporary music from Cage to Glass was played at Imola by Floraleda Sacchi. In the meanwhile, a classical harp and flute concert with Morrighan’s (Irene de Bartolo and Ambra Bianchi) made an echo to the innovative and cross-over repertoire held by Harp & Hang duo (Marianne Gubri, harp and Paolo Borghi, hang and percussions).

Other events were organized at the Music Museum like educational workshops for children on harp in legends and myths with the collaboration of the harp schools of San Remo, Bologna and Imola. Food events took place in some villas in the hills of the city, while yoga, mediation and massage sessions with live harp music opened new opportunities in the field of wellness and sound-healing.

The 3rd International Competition Diapason D’Oro will be held in Pordenone 5-7 May 2017.

The 7th International Contest and Festival Suoni D’Arpa under the Artistic Direction of E. Degli Esposti and L.Montenz will take place in Saluzzo 2-7 September 2017. Deadline for applications 10 July 2017. associazioneitalianarpa.it 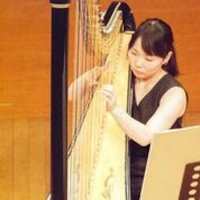 At the 17th OSAKA International Music Competition in 2016 Nanakon Hirai won the MATSUO prize for harp.

Hanako Hirano was appointed harpist to the Osaka Philharmonic Orchestra.

The 29th Nippon Harp Competition (Professional Division) will be held 15-19 November 2017 in Soka City. It is open to harpists under 35 years old. Applications will be accepted from 1 to 30 September 2017.  For the required repertoire please refer to: www.Harp-japan.com

On the 28 November 2016, harpist Britt Arend and flutist Rebecca Hall played Mozart’s Concerto for Flute and Harpat the Manoel Theatre accompanied by members of the Malta Philharmonic Orchestra.

On the 25 January 2017, Maltese singers Clare Ghigo and Gillian Zammit, along with harpist Britt Arend performed enchanting music for Harp and Voice at the Salle des Mariages in Paris in a special concert for the EU Presidency Cultural Program.

Caroline Calleja, harp and Fiorella Camilleri performed Mozart’s Concerto for Flute and Harp on the 1 October 2016.

Mercedez Gómez from Mexico performed a series of concerts with the Philharmonic Orchestra of Morocco in Casablanca and Rabat in November 2016. She was soloist for the double concerto Al son for harp, guitar and strings by Mexican composer and conductor, Gerardo Tamez.

The Second All-Russia Musical Competition took place in December 2016 and was organized by the Ministry of Culture.

Twenty-two harpists took part in the competition. The three stages showed a very high professional level of the participants. The program included baroque and Russian music, sonatas or program pieces by foreign composers of the 20th century, virtuoso compositions and Ravel or Debussy with chamber ensemble or orchestra.

We very much hope that in four years we will have The Third All-Russia Musical Competition.

The main idea of this festival is to promote our instrument, to support all harpists and young composers. Well known composers, members of Russian Harp Society continue to write for harp and ensembles with harp. The Russian Harp Society plays a very important role in harp life in Russia. Every year the performing level becomes higher, we obtain new compositions to perform and the festival is very popular among people. Harp life in Russia, especially in Moscow, is very active.

In January 2017 Brin Bernatovič gave two solo recitals at the Academy for Music in Zagreb (Croatia) and in Sinsgog (Maribor, Slovenia).

Results of the the 4th International Competition in Velenje, Slovenia:

All prizewinners are from Slovenia.

Kobie du Plessis, from Cape Town, has been invited to perform at the International Harp Festival in Rio and in May 2017 and will give a series of solo recitals.

Christy-Lyn Marais is a singer-harpist from Cape Town with a passion for performing and making harp more accessible to listeners and learners. She has been chosen to give a workshop at the Virtual Harp Summit in March 2017 on How to Sing and Play the Harp.

In February 2017 she performed at the Knysna Celtic Festival with her own arrangements of Irish and Scottish songs. These are now available for download on her website www.christylynmusic.com

In 2016 she started a series of “Harp Help” videos on YouTube and she also gives regular online concerts which draw viewers from many different time zones who make comments in real-time while Christy-Lyn performs and answers questions between the songs.

Lisa Britz, still a high school student in Cape Town, was a Finalist in the National Youth Music Competition in October 2016 and was awarded the prestigious runner up prize in the “Other Instruments” category. At the Hugo Lambrechts Music Centre Prize Giving she was honored among the three top achievers of the school. She performed as soloist in the Fantasy for Harp and Strings by Allan Stephenson with the Hugo Lambrechts Symphony Orchestra during their tour to Bratislava, Vienna and Prague in December 2016.

The V. Jornadas de arpa, organized by AEDA, took place at the end of June in the Real Conservatorio Superior de Música in Madrid. Sylvain Blassel conducted a masterclass and gave a solo recital. Other performers included Adriano Sagineto and Rosa Diaz Cotán, and Enrique Rueda held a lecture on the Debussy Trio. 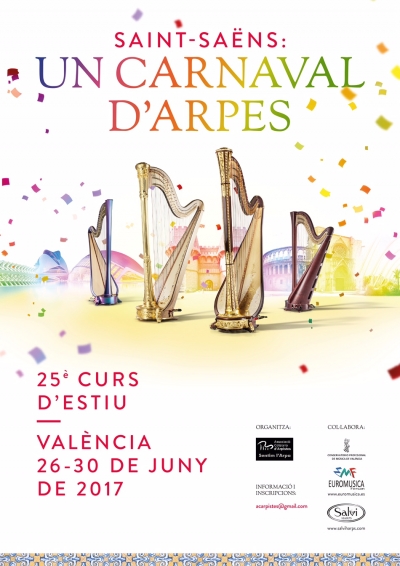 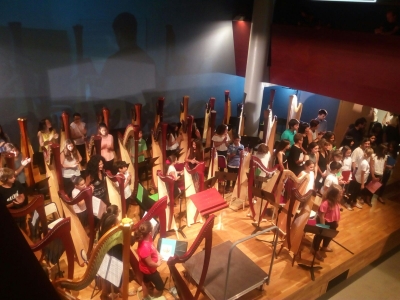 Anne Bassand was the organizer of the Harp Festival “Harfenfest Luzern 2016” in September 2016. Masterclasses and concerts were given by Susann McDonald, Anne Bassand, Monika Stadler, and Duo Flicklauder (Sabine Moser, harp and Rahel Marty, violin).

First prize winner of the 2016 International Harp Contest in Israel, Yuying Chen, was invited to play the Ginastera Harp Concerto with the Moment Musical Orchestra on 14 November 2016. 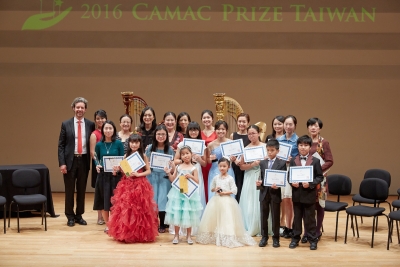 The first Camac Prize Taiwan took place from 26 October to 26 November 2016 in Taipei. With the help of modern technology, the participants from six countries were able to complete their first round through the internet. The final stages were held the day before the closing ceremony on 27 November. The winners (Charmaine Teo from Singapore; Rose Shek and Wong Yu Yin Cantadivina, both from Hong Kong), guest harpists (Jakez Francois, France; Saori Mouri, Japan; Joy Yeh, Canada), and local harpist, Shanon Chieh, played at the closing concert.

Shannon Chieh, curator of the 2016 Innovation Series for the National Performing Arts Center, not only produced a modern music theatre incorporates theatrical elements, visual arts, new media and lighting design including herself performing Fidelité by G. Aperghis, but also invited Neue Vocalsolisten and Ensemble Quatrain Cologne from Germany to be part of this year’s series. 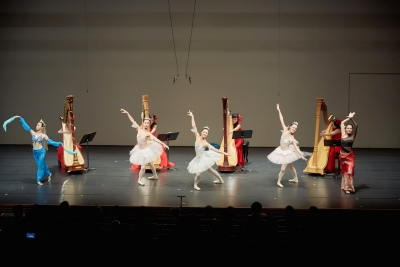 Şirin Pancaroğlu gave three benefit concerts for the Association for the Art of the Harp and Polio Disease Fund in October through December 2016 in Istanbul.

She made a musical presentation under the name of “the color in music” on 4 February at the Summart Art Center, Istanbul.

Cagatay Akyol performed with Bulent Evcil (flute) at Hekimbasi Yalisi, Istanbul on 6 and 14 November at Goethe Institute, Ankara and 21 November at Hikmet Simsek Art Center, Izmir. He gave two concerts with his ensemble “Arpanatolia” at the Turkish Japanese Foundation, Ankara and at the Mehmet Akif Ersoy University, Burdur.

Meric Donuk performed the promotional concert of her first solo album Mahfuz on 8 October at Adahan Hotel in Istanbul.

Oliver Wass won third prize and the Andreas Vigh prize in the IV Szeged International Harp Competition in December 2016. Together with his trio, the Pelléas Ensemble, he won the Grand Prize and Audience Prize in the St Martin’s-in-the-Fields Chamber Competition, First Prize in the British Harp Chamber Music Competition, a Park Lane Group Young Artists’ recital at SJSS and they were finalists in the Royal Over-Seas League Competition.

This year, Ibacus International Harp Courses will be running their Summer Course from 14-19 August 2017 for harpists aged 14-24, and also a Spring Course from 31 March – 3 April 2017 for adult learners. www.ibacusharpcourse.com