Kobie du Plessis, from Cape Town, has been invited to perform at the International Harp Festival in Rio and in May 2017 and will give a series of solo recitals.

Christy-Lyn Marais is a singer-harpist from Cape Town with a passion for performing and making harp more accessible to listeners and learners. She has been chosen to give a workshop at the Virtual Harp Summit in March 2017 on How to Sing and Play the Harp.

In February 2017 she performed at the Knysna Celtic Festival with her own arrangements of Irish and Scottish songs. These are now available for download on her website www.christylynmusic.com

In 2016 she started a series of “Harp Help” videos on YouTube and she also gives regular online concerts which draw viewers from many different time zones who make comments in real-time while Christy-Lyn performs and answers questions between the songs.

Lisa Britz, still a high school student in Cape Town, was a Finalist in the National Youth Music Competition in October 2016 and was awarded the prestigious runner up prize in the “Other Instruments” category. At the Hugo Lambrechts Music Centre Prize Giving she was honored among the three top achievers of the school. She performed as soloist in the Fantasy for Harp and Strings by Allan Stephenson with the Hugo Lambrechts Symphony Orchestra during their tour to Bratislava, Vienna and Prague in December 2016. 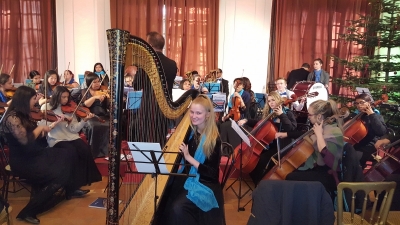